How does pad printing work?

The pad printing belongs to that wide range of technologies like screen printing, offset printing and rotogravure that have been optimized for the industry in order to print and decorate surfaces and items. It is called pad printing because it is based on the technology of ink transfer through a silicone pad.

It seems that pad printing was born from the need of some Swiss watchmakers, who in the last century were looking for a printing technique that allowed highest precision print of the watch quadrant.

This pad printing method was limited to Europe until the early 1970s, when some manufacturers began to export their products worldwide.

The working principle is based on the transfer of ink from an engraved plate to another surface through a silicone pad. The graphic to be printed is engraved on a special plate called cliché. Once the cliché is installed in the printing machine, its surface is inked and the excess of the ink removed through the squeegee so that the ink remains only in the area of the image to be printed. This process is now made through a closed cup filled with a special pad printing ink that is moved tangentially on the cliché.

In this way the ink fills the hollows of the engraving on the cliché and the edges of the moving cup wipe off the cliché the ink that has not been deposited in the engravings. With the air exposure and the resulting evaporation of the solvents from the inked surface (pic. A) there is an increase in the ink adhesion properties to the silicone pad.

The pad is placed directly on the cliché, pressed on its surface so that the ink adheres to it (pic.B), it is then removed by lifting it. 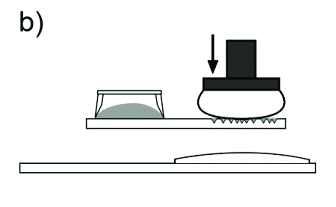 Thanks to the physical alterations undergone during the inking, the squeegee process and the air exposure, the ink leaves the inked area and moves to the pad (pic. C).

Once the pad has been lifted from the plate, a short period of time elapses before the ink that is deposited on it, is transferred to the final surface. During this phase, it undergoes again physical alterations due to the solvent that, by evaporating from the external layer, increases the viscosity and the adhesion properties (pic. D).

The physical alterations of the ink layer during the printing process and the solvent evaporation help it leave the pad when it is pushed onto the surface for transferring the image (pic. E and F).